Genetic data is often overlooked and geneticists are rarely at the top of the marine planning party guest list. This results in a significant gap in the protection of evolutionary processes, that are essential for the long-term survival species in the face of environmental change. Genetic tools provide unique information useful for marine protection in a way that complements other approaches, such as satellite tracks and habitat mapping.

So why isn’t genetics being systematically used in marine spatial protection? Research suggests that genetic data is considered valuable by planners and policy-makers, but because it is generally dispersed, inaccessible, or misunderstood.

Fortunately, this is a problem that we can solve.

The Geospatial Genetics project - a collaboration between NRDC, WCS, UCSB, and the IUCN Joint SSC/WCPA Marine Mammal Protected Area Task Force - is empowering geneticists with the tools they need to more actively engage in marine protection. The project helps geneticists to mobilize their data by transforming it into geospatial maps and then visualizing it in SeaSketch. Maps are deeply intuitive and can easily be explained in the planning and policy arena.

In addition to providing a space for the genetics community to view and contribute geospatial information, a rich set of collaboration tools specifically support iterative planning discussions, in-person and remotely. Participants have access to discussion forums, that facilitate map-based conversations. The SeaSketch survey tool has also allowed project partners to solicit specific feedback from the community, including the submission of spatial plan ideas “sketched out” on the map.

The project is currently helping geneticists engage with the Task Force’s initiative to identify Important Marine Mammal Areas (IMMAs), a knowledge tool to guide conservation and management efforts. Guidance on how to identify IMMAs was released in October and a chapter on genetics was included, helping to mainstream genetics into the policy conversation.

The Task Force has also just completed its first expert regional workshop to identify 41 candidate IMMAs in the Mediterranean. There are five other workshops planned in major ocean regions over the next five years. 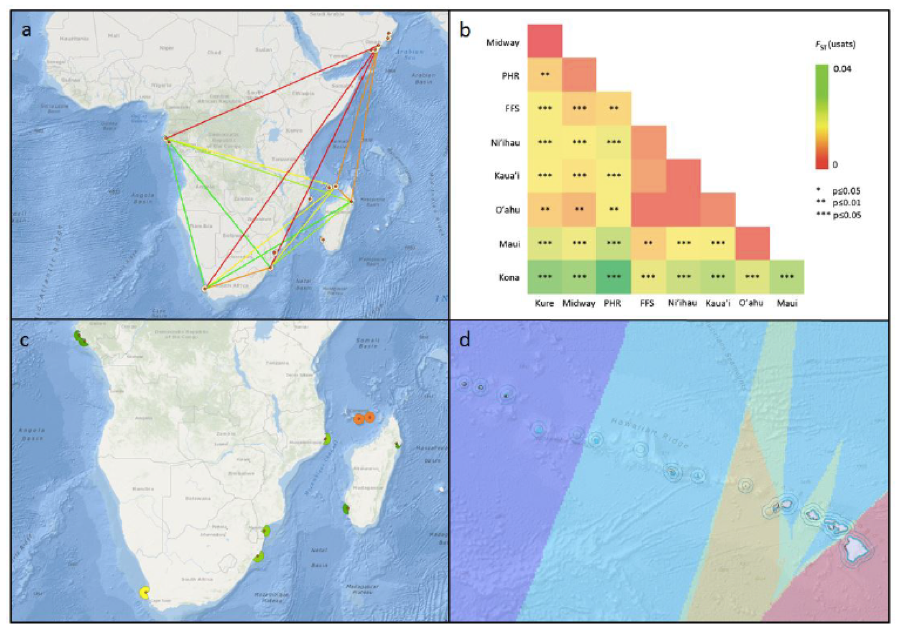 Four examples of geospatial genetic data layers and graphical analytics from case studies developed in SeaSketch: Genetic connectivity (a) and genetic diversity (c) of humpback whales off Africa; and pairwise (b) and interpolated (d) population differentiation of spinner dolphins in Hawaii. Adapted from IUCN-MMPATF (2016).

Looking forward, the Geospatial Genetics project is actively seeking support to continue to enable geneticists to actively engage with the IMMA identification process by providing the support they need to mobilize their data and participate in the upcoming regional workshops. More broadly, the project aims to continue to build the international community of geospatial geneticists interested in becoming more actively engaged in the policy arena.

It’s time for geneticists to brush off their party wear.