2016 is turning out to be a big year for marine sanctuaries. Currently only about 3 percent of the world’s oceans are protected. President Obama just nudged the percentage up a little with the recent decision to expand the Papahānaumokuākea marine sanctuary in Hawai’i.  But earlier this year, Ecuador had its own historic moment, when the president announced a new marine sanctuary around the Galapagos islands.

While the sanctuary itself is great news for conservation, as with most things, the devil is in the details of implementation. And in addition to the sanctuaries, Ecuador released a new management plan for the Galapagos in 2014. Figuring out how to create policies that will support both the new plan and the sanctuary, while also allowing for sustainable fishing, tourism, and the pursuit of scientific knowledge—all of which are important to local stakeholders—is even more complicated than it sounds. Past clashes over land use and fishing rights have even led to violence, such as the time in the 1990s when fishermen who’d been unceremoniously kicked off their fishing grounds took over a research station, holding scientists and their families hostage until an agreement could be made.

Thus, having a transparent and participatory process for implementation has become essential to the success of any plan for managing the Galapagos.

At first, it wasn’t clear how they would make use of the platform. They populated the map viewer with the PNG database and relevant information provided by partners. Colleagues at the Sustainable Fisheries Group developed analyses implemented in the sketching tools which enabled the technical team to sketch out their ideas and weigh trade-offs between conservation and economic outcomes of those prospective plans. SeaSketch empowers each user to express ideas on the map and access sophisticated analytical tools – a process otherwise mediated by a highly skilled technician – leveling the playing field for participation in science-based planning. WWF participants were interested in how the SeaSketch platform might compliment their ongoing work with other decision-support tools, including an open-source habitat risk assessment model. 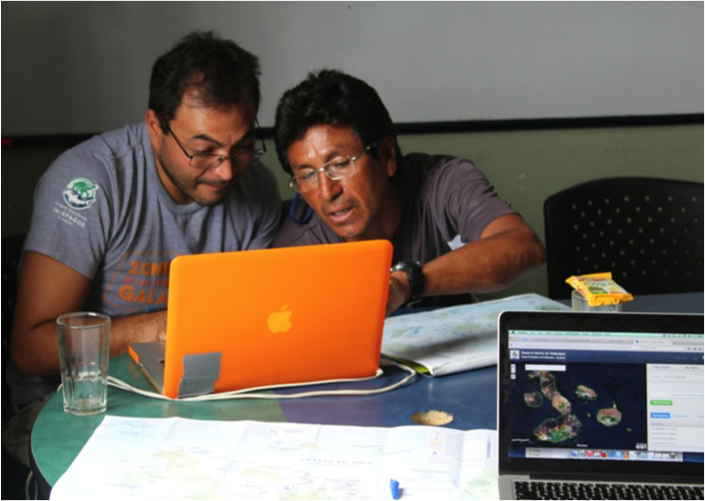 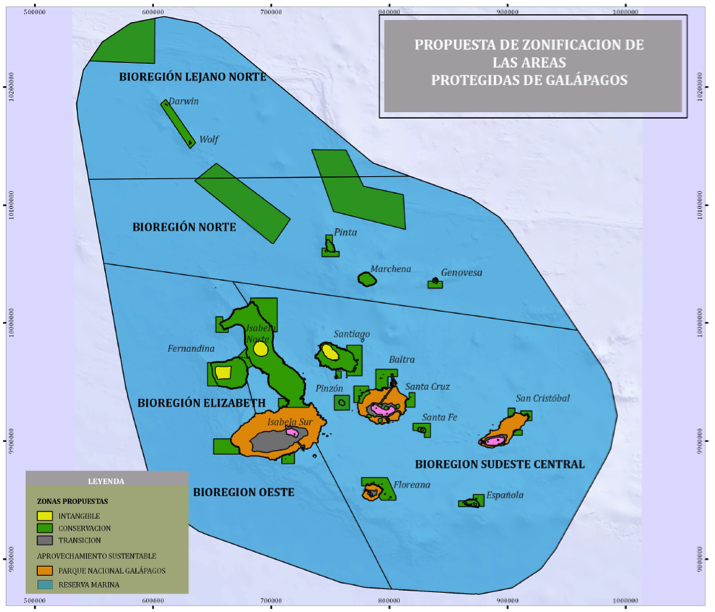 Above Left: PNG and CI staff interview local fishers to map out valued areas. Above Right: Early zoning proposal that aims to combine the national park and marine reserve into one protected area.

Fast-forward one year...CI and PNG are conducting participatory mapping exercises with SeaSketch, engaging fishing cooperatives in meetings throughout the archipelago.  The sketches they provide can inform the zoning process when summarized into heat-maps expressing the relative value of ocean space to these key stakeholders. With a WiFi-enabled laptop linked to the cellular network, fishers use data layers showing coastal place names and ocean depths, as well as measuring distance from the coast, to guide them as they outline their traditional fishing grounds on the map. By mapping out the human dimensions of use and value we fill a key information gap as well as ensuring greater transparency in the zoning process.  The zoning team then uses these maps to integrate social data with their existing biophysical and economic datasets, examining a diverse set of factors when comparing plans and ultimately making more holistic management decisions.

WWF-Ecuador together with the Natural Capital Project are applying the Integrated Valuation of Ecosystem Services and Tradeoff (InVEST) toolkit to map risk posed to coastal and marine habitats by human activities, including fishing, tourism and public use and marine navigation. WWF is building a database of maps and information about different habitat-stressor interactions to map ecosystem risk under alternative zoning and management options, and then connect these impacts to key biodiversity areas and the delivery of ocean benefits to the people of Galapagos.  Fisheries data collected through SeaSketch along with local knowledge from PNG has enabled the WWF team to produce comparative metrics that highlight conflicting uses and habitat risk hotspot across five biogeography regions.   Findings are being shared with marine managers and will serve as a baseline to evaluate the effectiveness of PNG's proposed zoning scheme, including where to prioritize costly monitoring, control and enforcement activities throughout the marine reserve.

Above Diagram: Example of how SeaSketch and InVEST modules can be used to inform marine planning.

Read more about how NatCap is supporting the rezoning process here. You can also learn about participatory mapping with SeaSketch on their blog.